More than 95% of a pesticide application does not reach its actual target, but ends up in our waterways, killing other organisms and harming ourselves. Organic pesticides are generally safer for humans, but can be just as fatal for other organisms. The great success of pesticides is the probable reason that, in the last 20 years, the worldwide bee population has declined by 40% since the 1970s, and the butterfly population by 60%. Bird populations that rely on these pollinators to feed their young, and humans who depend on the same pollinators to grow our food, are impacted too. 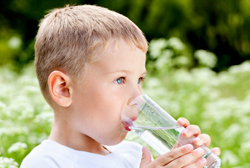 Pesticides are found in our drinking water 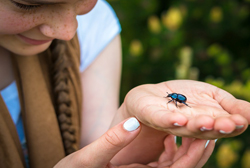 We are losing beneficial insects due to pesticides 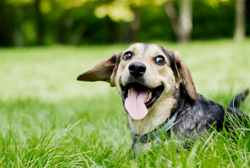 Many canine cancers are linked to lawn pesticides 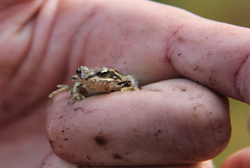 Amphibians are very vulnerable to pesticides 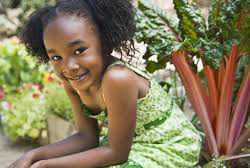 Pesticide use is linked to canine and human cancers, hormone imbalances and neurological impairments. Yet, American homeowners purchase more than one billion pounds of pesticides and herbicides every year. This has caused our lawns to become the largest, most toxic, ‘crop’ in the USA. While many countries have drastically limited or banned the use of these harmful pesticides, the US government is relaxing its safety requirements, and postponing consideration of the possible dangers of these chemicals.

Healthy yards really don’t need pesticides. In fact, regular pesticides applications damage soil health and will eventually stunt growth. In addition, pesticides can create a deadly cycle by doing exactly the opposite of what they were intended to do: causing growth of pests by eliminating the natural predators of those pests. For temporary problems with insects and diseases, there are often natural, less harmful solutions. If you have plants that are repeatedly attacked by pests, you should consider replacing them with more resilient species.

Next
Go to Top